Will Poor Governance Hold China Back?

The middle income trap. What is it? Basically it's when a country cannot make the transition from a upper middle income economy ($4,125 GNI Per Capita, World Bank) to a high income economy ($12,746 GNI per capita, World Bank). To understand the theory practically, a few countries in the trap are; Brazil, Malaysia, Argentina and the Philippines. A few countries who made the transition are Japan, South Korea and Taiwan. The question is, will China fall into the trap? This is something debated highly debated by economists, in part because of the variety of ways to calculate the boundaries of the middle income trap. The fact is, it exists, and we know this because of the stagnation upper middle income countries experience before they make the transition. There are a number of indicators worth considering such as, savings rate % of GDP, Investment rate % of GDP, manufacturing value added % of GDP, trade patterns (what exactly countries export), income inequality, infrastructure and governance. It is governance I would like to talk about today, it seems in our world today almost everything is quantifiable and made economically relevant, even governance. As seen in the graph on average the other upper middle income countries outperform China's government on all but effectiveness (which isn't surprising due to the absolute lack of red tape in China). This becomes interesting and relevant because on many other indicators mentioned above, China outshine their fellow upper middle income countries by a considerable margin. This is of course not surprising because economically China are driving forward with some serious urgency. But where will the lack of transparency leave them in terms of bridging the gap to become a high income economy? I say it won't have a dramatic effect, despite the bad rep China's government gets, if they had an election tomorrow, they would almost definitely win. Although a censoring communistic government has a hell of a lot of downsides, the fact is, they have helped China become the powerhouse it is today. Would love to hear some thoughts on the challenges China face in the future, things like income inequality, climate change and the ability to begin to manufacture highly technological exports are all blockades for China, the question is, will it simply hinder them or actually prevent them becoming a high income economy? 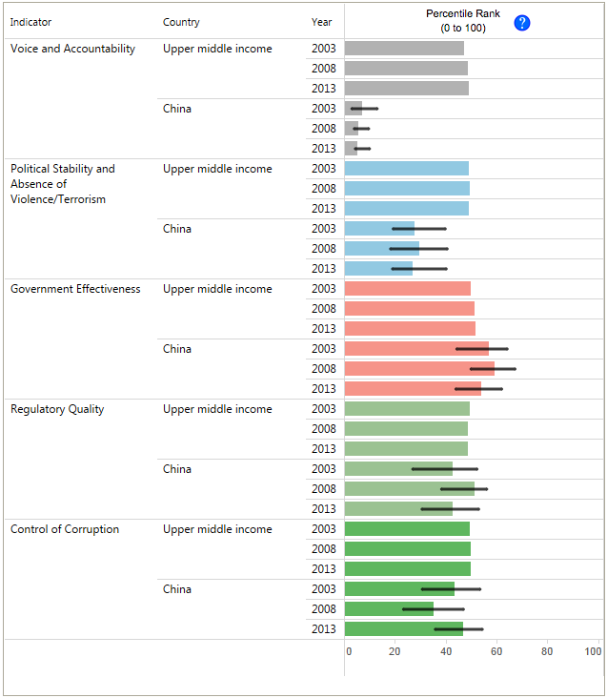